Legends of the Mid-autumn Festival 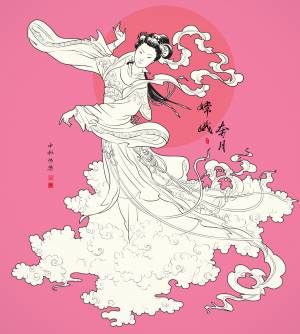 As one of the most prominent festivals in the Chinese cultural calendar, it’s only fitting that the Mid-autumn Festival should have a tale behind it that’s as colourful as the festival itself. There are numerous legends behind the origins of this traditional moon-worshipping festival, but the following three are the most popular versions that are still widely known today.

Chang’e Flying to the Moon

A long time ago, there were ten suns in the sky. The suns took turns to appear in the sky to warm the Earth, but one day, all ten of the suns decided to appear in the sky simultaneously. As they did so, the immense heat generated by their presence caused the crops to wither and the rivers to dry up. As the people suffered from this catastrophe, Houyi searched for a way to help them. Using just his bow and arrow, Houyi shot down nine of the ten suns from the top of the Kunlun Mountain.

Later, the archer married a beautiful woman named Chang’e, and took in apprentices who had started to flock to him to study archery. One day, when Houyi went to visit a friend who stayed near the Kunlun Mountains, he met the Queen Mother of the West—a goddess who is said to reside in the mountains—and she gave him an elixir of immortality for Chang’e and himself as a reward for his brave actions in saving the world.

Houyi later handed the elixir over to Chang’e and asked her to keep it safe, but an apprentice of Houyi’s had found out about the existence of the elixir, and attempted to procure the elixir for himself when Houyi was away. As Chang’e was unable to fight him off, she swallowed the elixir in its entirety. Her body was unable to handle a double dosage of the elixir and she found herself gradually being lifted to the heavens as a goddess, but due to her deep love for her husband, she chose to be an immortal deity residing in the moon as it was close to the earth. When Houyi returned home, he found what had happened and in calling out for his wife, spotted her distant figure on the moon. Heartbroken, he called for servants to set up offerings for his wife. In time, the practice spread as people from all over China began to pray to the new moon goddess, Chang’e, and moon worship during the mid-autumn festival became increasingly common.

The Rabbit, the Fox, and the Monkey

A second legend that provides clues to the moon worship, is the story of the rabbit, fox and monkey. The legend is thought to be a continuation of the story of Houyi and Chang’e. One day, three sages wanted to find out which animal was the kindest, among the rabbit, fox and monkey. They transformed themselves into pitiful old men and begged for food from these animals.

The three animals ran into a forest to try and find food for the old men, but while the fox returned with a big fish and the monkey returned with many fruits, the rabbit returned empty-handed as it was unable to find anything. The rabbit asked the other two animals to help build a fire, and then attempted to jump into the fire to offer its own flesh to the old men. However, the sages were touched by its kindness, and rescued the rabbit in time, before sending it to live in the moon with Chang’e.

The rabbit, now known as the Jade Rabbit, soon became fast friends with Chang’e, and when the latter confided her story to the rabbit, the rabbit decided to try its best to concoct a medicine that could help Chang’e return to earth. During the Mid-autumn Festival, it is said that the rabbit can be seen making his divine medicine.

Uprising against the Yuan Government

The last legend concerns the eating of mooncakes during the Mid-autumn Festival. During the Yuan dynasty, it’s said that the people were governed harshly and many longed to revolt. However, due to the vigilance of the Yuan government which worked to ensure that messages could not be passed freely and that weapons would be strictly restricted, it was difficult for people to revolt.

Under these circumstances, Zhu Yuanzhang (who became the first emperor of the later Ming Dynasty) decided to think of a way to unite all who wished to rebel. His military advisor, Liu Bowen, then came up with an idea to deliver the message to all. A paper message hidden inside hefty mooncakes let people know that they should rise up against the government on 15 August. These mooncakes were then distributed far and wide. On that day, people rose up against the Yuan government and the uprising was a success.