A Traditional Halloween Experience in Singapore 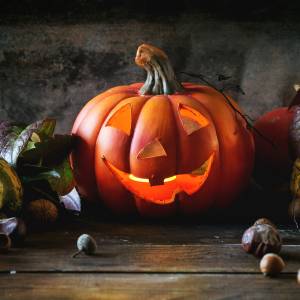 Halloween celebrations today retain many elements of pagan customs that people everywhere have continued to follow since the start of the traditional Celtic festival of Samhain hundreds of years ago. Known by many different names, the festival was typically celebrated in the Celtic countries between 31 October and 1 November, and was known to mark the end of summer or the start of winter. Just like the Hungry Ghost Festival in Singapore, Halloween is considered to be a liminal period where the border between this world and the otherworld is thinnest, and spirits, fairies, and the souls of the dead are believed to enter our world and be particularly active during this time.

As the festival grows in popularity, an increasing number of traditional Halloween activities are becoming more widely available in Singapore. This Halloween, celebrate the festival with your friends and family by organising or taking part in some of the most popular and traditional festival activities.

Dressing up in a costume and going from door to door to collect various treats, is a practice that is likely to have descended from the traditional practice of ‘souling’ where children and beggars went from door to door (sometimes in a fantastic disguise) to collect soul cakes. In exchange for their prayers for the souls of the donors’ loved ones, soulers would receive sweet cakes that were made with spices like cinnamon and ginger, and may include raisins or currants. This Halloween, aside from distributing chocolates and sweets, why not consider baking one of these traditional pastries for the kids? Try out one of these ‘soul cake’ recipes from All Recipes (here) or Genius Kitchen (here). But even normal foods could easily be given a Halloween twist. For instance, create boiled eggs with gruesome spider-like veins all over by tapping egg shells lightly before boiling the eggs in coloured water.

For those with a sweet tooth, there’s no shortage of Halloween-themed snacks and treats that could be created easily for this festival. Gummy worms, caramel popcorn mixed with candy, cake pops, and M&M ‘eyes’ embedded in colourful pastries are all popular choices. Toffee apples are also exceptionally popular during this period, and can easily be made by rolling an apple in melted sugar and butter, before dipping the apple into icy water for the toffee to set.

If you’re setting up a Halloween party during this time, try organising one of these traditional Halloween games for the guests? Many of these may seem childish but they’re a ton of fun for the younger crowd. The most well-known game is apple bobbing, where apples are left to bob on the surface of a large tub of water and players take turns to try and snag one by using their teeth alone. Other games include trying to jump and eat sticky foods hung up high without using one’s hands, tossing apple peel backwards and interpreting the shape that the peel makes (the peel is believed to land in the shape of the first initial of their future spouse’s name), as well as melting of tin or lead and pouring of the metal into a bucket of cold water to interpret the shape it makes.

Trick or treating is another quintessential Halloween activity. In the past, it was common for the children who went trick or treating to prepare a small performance such as the recital of a poem or the singing of a short song for the amusement of the residents. These performances would gain them some small treats as a token of appreciation. However, if these visitors were unwelcomed or sent away without a single sweet to show for their efforts, it wouldn’t be unlikely for them to threaten to do some small mischief to show their displeasure. These days, however, performances are rarely done and children often need do nothing else but show up in a costume to charm generous inhabitants into parting with their candy.

In Singapore, trick or treating is not widely carried out, but there are still plenty of opportunities for the kids to score plenty of candy. In the second half of October, family-friendly events are frequently organised at many shopping centres, community centres, and tourist attractions, where children are encouraged to participate in games or overcome challenges in order to obtain sweet rewards. Otherwise, a more traditional trick or treating where children go from door to door to ask for candy, can still be experienced at the Woodlands Woodgrove neighbourhood on the evening of 31 October.

However, if dressing up is not your thing, you can still enjoy listening to scary stories, watching horror movies and plays which are in no short supply during the late October period. Families should check out the local museums, theatres and libraries, which have organised a slew of Halloween-themed events and activities including spooky mazes, carnival games, monster-making crafts, and even circus acts that are set to entertain both the young and old.

I read that appealing would need to be based on my circumstance at that point in time when I applied so even if my pay increases by 500 this year, it won’t be considered a .....

Nationality make a difference. You’ll be surprised. If one is Ukrainian or Russian, be prepared for rejection on first try. You seem to be very secretive about your nationality.

1. It saves on application fee if you apply once compared to applying twice. Having a kid shows .....

Re: STVP days after EP Cancellation

Can somebody else confirm the above poster's statement about end of EP STVP? This is good news.

News only (not firsthand) but appears to be the case?

Both women are racing against the clock to find a new job in .....