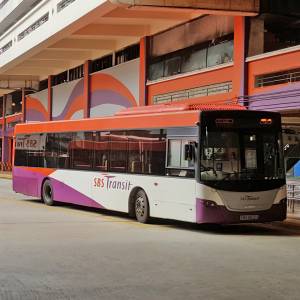 While we love the excitement and convenience of living in a major metropolis, it’s undeniable that city life comes with certain costs: congestion, pollution, and a higher cost of living being but a few of the most common issues. Public transportation is a common gripe of commuters around the world as subways and buses are filled to bursting with the crowds, and are often considered dirty or even unreliable. In Singapore, however, while the overcrowding is certainly an issue during peak hours, public transportation is generally clean, prompt, and reliable.

When Singapore first gained independence in 1965, the main form of public transportation was the bus. The biggest bus operator then was Singapore Traction Company, a company which monopolised bus routes within the central area of the city. After government protectionism was removed, the company folded due to economic pressures while three smaller players weathered the storm. These three companies merged into one and became known as the Singapore Bus Service, a name to which the current SBS Transit, the largest and most extensive of the four current bus operators, pays homage. However, in order to encourage better service and efficiency, the government then created a second public transport company, Trans-Island Bus Services. This was later subsumed by the SMRT Corporation, whereupon SMRT Buses became the second major operator of bus services in Singapore.

With passengers taking over 3.8 million rides in 2015 and with two new service providers joining the long established ranks of SBS Transit and SMRT Buses in 2016, it’s safe to say that this mode of transportation remains extremely popular today. Tower Transit Singapore officially commenced operations on 29 May 2016, while Go-Ahead Singapore (we kid you not about the name) was the newest operator to join the group on 4 September 2016.

There are many benefits that arise from taking the bus. The buses are well-maintained, clean and prompt in arriving at regular timings and intervals. Even if you are taking a bus on an unpopular route during a non-peak period, the longest you’d ever have to wait for a bus should be about 20 minutes or so. Shorter waiting periods of five to ten minutes are common, especially for feeder buses that ply certain neighbourhoods. For those with reduced mobility, many buses in Singapore are wheelchair accessible, where the driver will personally set down a ramp as and when anyone with a wheelchair wishes to board or disembark.

Special services are also available throughout the island. The NightRider and Nite Owl buses, run by SMRT and SBS respectively, provide late night services on weekends and the eves of public holidays. Premium bus services are run by both public and private bus companies, and these are commonly taken by commuters who need to travel in and out of the Central Business District during peak hours or to office compounds located in isolated neighbourhoods. For a flat fee between $2.70 and $7.00, passengers taking the Premium service are guaranteed a seat on board and a comfortable ride to their destination. Fast Forward buses, like their namesake, are another example of a special bus service as these buses allows passengers to enjoy a shorter commute to and from high-traffic areas during peak hours by eliminating numerous stops along the way.

On the other hand, what’s not so great about travelling by bus is the poor design in some of the newer buses, as well as the uncertainty of alighting at the right stop faced by those who are new in town. Unlike their London counterparts, our red topped buses here are not installed with an electronic screen which indicates the name of each stop that the bus pulls up at. Nevertheless, you can tell bus stops apart by their unique identification numbers which are considerately labelled on the side of the shelter roofs and on the small placards hanging on the signposts. In either case, it’s a sure bet that the number would duck shyly out of sight just as soon as the bus draws up close enough for you to read. As such, If no places of interest are within sight, your best bet would be to suck it up and ask the driver for confirmation of your current location, or to decide if that was indeed bus stop 52069 or 52089 you had seen flashing past, before the bus door closes again.

Another mildly irritating feature of bus travel would be the design of major operator SBS’s newer buses. These buses can be told apart from the older models by their raised seats at the back which allow those passengers to gaze down upon humanity from their lofty seats. And it may not be just those passengers who are getting a good view as the wide windows at the back of the bus extend perilously close to the very seats themselves. You can draw your own conclusions from that. It’s also unsurprising that the elderly and infirm face difficulty in clambering up to these seats and in extricating themselves safely afterwards.

Standing room is also severely compromised in such buses. The back aisle seems to have been carefully designed to provide standing room a single person, and is often the cause of a tricky situation for people who have to get out from their seats while contorting their bodies and bags around the other longsuffering standing passengers à la Cirque du Bus.

In any case, love it or hate it, the bus is an indispensable part of everyday life in Singapore, and a genuine godsend to those who despair of the intermittent breakdowns on the MRT as well as the human crunch experienced during peak hours. On the bus at least, you’d always be assured of some personal space if you’re lucky enough to grab a seat, and plenty of time to finish replying those emails on your way home.