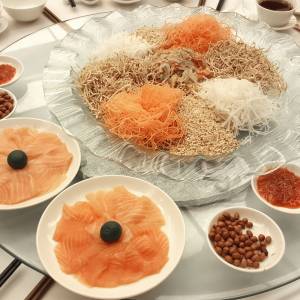 As the fifteen-day celebration of the Lunar New Year looms close, festive goodies are beginning to pile up in the average Chinese home till the shelves themselves begin to creak under the portly bulk of assorted seasonal treats and delicacies. It’s certainly not uncommon to hear complaints about the gaining of holiday weight or the insidious threat of high cholesterol and diabetes, but you’d almost never hear a word against the taste of these delicious foods. Among the wealth of available treats, eight of them should definitely not be missed.

A well-loved food in Singapore—especially during the Lunar New Year period—love letters are commonly sold at bakeries and supermarkets everywhere. These wafers are also known as dan juan (egg rolls) in Chinese, and are mainly made of egg, flour and sugar. Each paper-thin wafer is rolled up to form a delicate roll, reminiscent of the letters that were carried by messenger pigeons hundreds of years ago. Each bite is deliciously crisp and fragrant and is usually available plain, or with a chocolate or strawberry cream filling.

Don’t let the humble appearance of these pastries fool you. These flaky golden pastries are topped with sweet pineapple jam, and the pastry itself is rich and buttery. Each is small enough to be eaten in a single mouthful. The crumbly salty pastry complements the deliciously sticky and sweet jam perfectly, making this one of the most addictive CNY goodies you’d find. Pineapple tarts are usually available in two forms. They’re either rectangular or round pastries stuffed with pineapple jam, or starburst cookies with a dollop of jam decorating the middle.

If there’s just one food that you’re going to try this New Year, make it bak kwa. Also called rou gan (dried meat), these barbequed meat slices have an addictive sweetness and spice that make it hard for anyone to eat just one piece. Some of the more established stores have a cultivated following who would swear by the recipes. The meat can be broadly divided into two types: those made with minced meat, and those made with thinly sliced pieces of meat. The former tends to be softer, thinner and sweeter. The latter is a little harder, chewier and provides a more well-rounded flavour. Bak kwa is typically sold by weight and trimmed into squares, but they are also sold in small round discs known as ‘golden coins’ for that extra festive touch.

When dining out during the CNY period, you may happen to see people tossing what seems like a lot of carrots into the air. As bizarre as this may seem, eating yusheng is a common Chinese tradition during the CNY period as the name is a homonym for an increase in abundance. The food itself is imbued with significance, where each ingredient, sauce and condiment represents a particular blessing. The dish is typically comprised of carrots, radish, raw fish and crackers, and mixed with plum sauce and oil.

These addictive cookies are small and round, and only about as thick as your little finger. Traditionally sold and eaten during the Lunar New Year, these cookies are mainly made with roasted peanuts, sugar and flour, and provide a satisfying crunch that melts in the mouth.

Fresh fruit is delicious at any time of year, but mandarin oranges and pomelos which come into season during the New Year period are available in much greater quantities and are especially lucky foods to eat during this festival as they are thought to bring luck and prosperity into the house. We’re not too sure how the prosperity part works considering how almost every Chinese family would be sure to be well stocked with these fruits (hello, inflation!) but there’s probably no harm in boosting your vitamin C intake.

This glutinous cake is something that you’d find in Singapore only during the Lunar New Year. The food is popular during this time as the name is a homonym for a ‘high’ year, representing hopes of one’s continued progress and improvement over the course of the year. Each sticky dark brown cake is typically sold with the word ‘prosperity’ written upon it in Chinese. The cake is sliced into flat thin pieces and then either steamed or fried.

Despite being one of the more laborious cakes to make, Kueh Lapis remains a staple in the wide variety of treats and snacks offered to visitors during the holiday period. This moist, buttery and sweet cake is extremely rich and is only served in very small slices. The traditional cake is finely layered and served plain, although newer twists to the recipe have added fruits to the cake such as cranberries and durian.

Thanks for the insight. I won't stress about it. If they make an offer, great - it'd be nice to return to SG. If not, then there's not much I can do about it.

Hi! I have a question, I know this is not so related topic but I am one of a tenant in a condo and staying in the Master's Bedroom, my family will be visiting Singapore this December for 3 weeks and my initial plan was .....

Hi! I have a question, I know this is not so related topic but I am one of a tenant in a condo and staying in the Master's Bedroom, my family will be visiting Singapore this December for 3 weeks and my initial plan was to let them stay with me in the condo where I am staying, .....