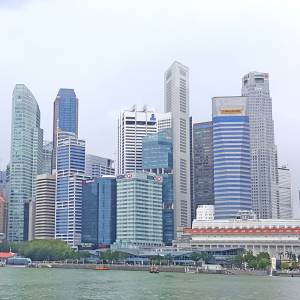 Many travellers do their homework on the country they wish to visit beforehand. Places to visit, food to try and unique experiences. But, savvy travellers also do research on customs and traditions to avoid committing a faux pas that gets them on the front page of the local news or worse, a crime.

Singapore, like many other countries, has its own fair share of quirks, traditions and customs unique to itself. So here is our guide of uniquely Singaporean customs for travellers or people looking to live or visit here.

However, despite their best efforts, the ban was only partially lifted and medicinal gum can be prescribed by doctors. Standard chewing gum however is still banned. There are fairly hefty fines for chewing gum so do your best to abstain from it while visiting

Chope culture is a fairly controversial one and people are divided over this issue. Basically, people leave a packet of tissue paper to “reserve” a table at a hawker centre and it is an unwritten law every local abides to.

However, there are some people who simply do not care and will sit at these tables either way, usually resulting in a heated argument.

Personally, I don’t practice this as I find it weird but some of my friends do so. Eh? Either way it’s best to abide by it if you are visiting briefly.

Some of you may remember the unfortunate case of Michael Fay. He was an American teenager studying at the Singapore American School and plead guilty to the crimes of vandalism and theft of street signs. Despite widespread international media attention and then President Bill Clinton interceding on his behalf, Singapore still carried out the sentence and caned the 18 year old.

When you are on a plane landing in Singapore, you may have heard the announcement that Singapore has draconian penalties for drug trafficking. This attitude extends to other crimes including petty crimes such as littering and smoking. Not to mention some weird ones too like carrying durians in public transport .

In other words, behave yourself or else.

You may hear locals calling store owners “aunty” or “uncle”. No, we are not one big family - it's simply local colloquialism and is a very friendly term used to respectfully address another person of a more senior age in a society where the elders are treated with such. So do not be surprisee if you hear a local go “Uncle, one plate of chicken rice please!”

You can virtually address anyone your senior with “Uncle” or “Aunty” here - well, except those that thinks it makes them sound older!

Singlish. The official unofficial language of Singapore. The government has tried to stamp out Singlish over the years with many “Speak Good English” campaigns all of which have ended in failing abysmally with the government finally throwing their hands in submission and accepting the fact that Singlish is here to stay.

My “ang moh” friends have listened to me converse with locals in Singlish with an expression of pure bafflement on their faces.

Singlish was born from the dialects, slangs, lingos and mis-translations of different languages to English resulting in the birth of a pseudo-language. Since 2000, Singlish words have even made it into the Oxford dictionary.

While we do try our best to dial back on Singlish when speaking to foreigners, a few errant phrases may escape our lips from time to time. And asking us to translate may be an exercise in futility as that would involve  quite literally translating maybe around 5 languages crammed into a sentence into proper English.

Singapore is one of the only countries in the world with a strong hawker culture. With many hawker centres all over the island, every Singaporean you meet will tell you that the best place to get a certain dish will be at a specific hawker centre.

If you visit, I suggest avoiding Newton Circus as it has become a pure tourist trap. Do your research or ask the locals where to get some great food. I’d recommend heading to a few places for a proper experience. Amoy Street Food Centre, Maxwell Food Centre and the Old Airport Road Food Centre.

7. Keep to the left on escalators

There is an unwritten law that everyone abides by when taking escalators. Just like in the roads, you keep left unless you are overtaking. So everyone here stands on the left side of the escalator if they are not looking to climb up the escalator so people who are in a hurry get free passage if they need to. Standing on the right and flouting this law of the streets will earn you stares at best and verbal rebukes at worst.

Singaporeans love a bargain. This is the reason why one of Singapore’s biggest past-time is joining a queueing. To Singaporeans, a queue usually means there’s a giveaway or a great bargain up for grabs. Some join a queue even though they have no idea what awaits them at the end of the queue - they do it just because there is one. This behaviour is not exclusive to brick-and-mortar stores, there are cases of people simply waiting (in other words, queueing up), just so they can be the first few to get their hands on the best limited flash deals online at stores such as Lazada or Qoo10.

If you mess up, don’t worry, Singaporeans are (usually) a forgiving and understanding lot. Simply acknowledge your mistake and move on from there. Don’t worry about it. Some people have lived here all their life and they have yet to perfect the art of Singlish - or the unique customs of Singapore for that matter! Trying is half the battle won. Have fun in Singapore!

Thanks for the insight. I won't stress about it. If they make an offer, great - it'd be nice to return to SG. If not, then there's not much I can do about it.

Hi! I have a question, I know this is not so related topic but I am one of a tenant in a condo and staying in the Master's Bedroom, my family will be visiting Singapore this December for 3 weeks and my initial plan was .....

Hi! I have a question, I know this is not so related topic but I am one of a tenant in a condo and staying in the Master's Bedroom, my family will be visiting Singapore this December for 3 weeks and my initial plan was to let them stay with me in the condo where I am staying, .....