Easter Traditions Around the World 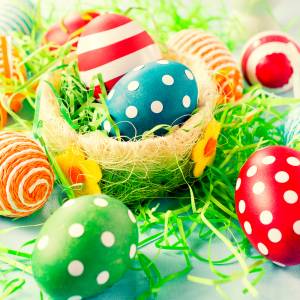 After Christmas, Easter is the next most widely celebrated Christian holiday in Singapore. With promises of chocolate and fun egg hunts, it’s little surprise that many people—particularly the young ones—are enthusiastic about taking part in the Easter festivities. However, did you know that egg hunting and chocolate bunnies are traditions with pagan roots, but with no ties to the Christian religion?

The Easter Bunny originates from German folklore, where an ‘Easter hare’ judges how well or poorly behaved children have been and hands out the colourful eggs, sweets and toys that he carries around in a basket. In spite of its folkloric origins, some Christians remain fond of the Easter candy tradition, as Easter marks the end of Lenten fasting and they would then be free to indulge in their favourite foods. From a Christian perspective, the Easter egg also represents the resurrection of Jesus Christ and his emergence from the tomb.

In Singapore, people commonly celebrate the festival by taking part in Easter Egg hunts and consuming lots of chocolate and marshmallow. But if you’re wondering why, of all things, should there be yet another holiday involving prodigious candy consumption, you can console yourself with the thought that there are far stranger Easter holiday traditions out there:

When mass ends at 11am and the church bell chimes, residents in Corfu begin enthusiastically hurling pottery pieces out of their windows. During the Greek Orthodox Easter, people celebrate the festival with such wanton destruction with the aim of generating as much noise as they can. The practice originated from the old Venetian custom of throwing old things from the window on New Year’s Day, in hopes that this would bring new things to the home. If you find yourself in Corfu on April 28 this year, join in this exhilarating stress-relieving tradition by chucking earthenware filled with water—the impact is more gratifying and generates more noise—out of your window, and see if you can raise more havoc than Mrs Stephanidis next door.

Being in a medieval procession:

If your idea of a perfect holiday celebration is to go big or go home, you might like how the Bavarian towns in Germany celebrate Easter. On Easter Monday—the day where St George was said to have been martyred—people come from neighbouring towns to participate in the Georgiritt in Traunstein. During this St. George Parade, people wear medieval costumes and set off on a long procession with hundreds of horses and carriages decked with garlands.

In Slovakia, a pagan tradition is still alive and practised every Easter. On Easter Monday, people visit friends and family, and by whipping the women with willow branches and dousing people with water, bless them with beauty, youth and fertility. In exchange for this rather dubious boon, the ladies hand out Easter eggs, ribbon, chocolate or money, to the men. In case you’re hesitant and making a note of where not to be during Easter, note that women are also doused with water in Hungary, and whipped with willow branches in the Czech Republic.

Tourists do not have to worry about The Purge occurring in Norway during Easter, as thankfully, the Norwegians are only crazy about crime in terms of their media consumption during this festival. According to the Independent, this tradition really began in 1923 after two Norwegians pulled a clever marketing trick for their crime novel ‘The Bergen Train was Robbed at Night’, where they paid the national newspaper to print a fake news article with the same title on the front page on Easter Sunday. Since then, local bookstores stock a wide array of crime novels and television channels abound with detective shows over the holiday season, allowing Norwegians to settle down with a nice bit of crime to wait out the last days of winter.

Whining mama doesn't get much sympathy in Dublin!