Settling in to Singaporean culture and lifestyle 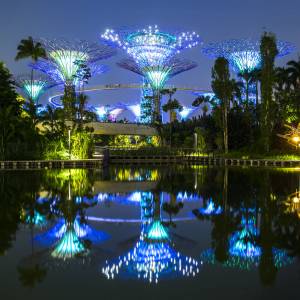 Home to the beautiful Gardens by the Bay, otherworldly skyscrapers, and a culture that is as immersive and vibrant as its scenery, Singapore is a metropolitan paradise, perfect for city dwellers and nature lovers alike.

Whether you’re thinking of making the move or you’ve already relocated, here are a few essential things to know about Singaporean culture and lifestyle to help you feel at home.

Exploring the country’s unique culture through food is as exciting as it is essential, as “Singapore is food obsessed and every social gathering centers around food. If you want to connect with locals, ask them for their food recommendations. It is always a great conversation starter and will likely lead to an invitation to dine together” says LiLing, an expat originally from Singapore and CEO of Trekaroo.

Authentic Singaporean cuisine finds influence in Malay, Chinese and Indian cuisine which reflects the multicultural nature of the country itself. Some popular dishes include noodle soups, stir-fries, steamed dumplings and light, aromatic curries. Many dishes are made with coconut milk and spices, which gives food an underlying sweetness and soft, watery texture that expats may not be familiar with, but will surely adore once used to them.

With a high cost of living, eating out can be expensive, but luckily, Singapore is home to as many high-end restaurants as it is hawkers. “The best local food is often found in neighborhood food courts locally referred to as hawker centres. They are all over the island but the local favourites are often located under public housing high rise apartments or next to a wet market” says LiLing.

Hawker centres offer a wide range of quality local and international food options and are most popular among locals, tourists and expats alike. Most signs/menus are translated into English, so you shouldn’t have a problem understanding what’s on offer if you haven’t yet fully grasped the local language.

During busy hours like lunchtime it’s common to share tables with strangers, so don’t be surprised if you find yourself sitting next to a complete stranger, and likewise, don’t be afraid to join another person’s table – it’s the norm. To truly experience and immerse yourself in to Singaporean eating culture, it’s well worth dining at a hawker centre or two.

Home to a beautiful mix of diverse cultures and creeds, it’s no surprise that Singapore has four official languages including English, Malay, Mandarin, and Tamil. As English is widely spoken, native English speakers should find it easy to communicate, however, having a basic understanding of the other major languages can be very beneficial. Most Singaporeans are bilingual and can speak both English (because it is the language of education and business) and their mother-tongue (corresponding to their government-registered race).

LiLing adds that “Singaporeans use lots of slang when speaking casually. Even the most educated who have as good a command of English as a Brit will lapse into slang. Definitely pick up a book on Singaporean slang ahead of time so you can catch on more quickly”.

Another form of language you’ll have to learn while living in Singapore is body language. In Singapore, many features of body language derive from Buddhist beliefs. In Buddhism, it is believed that the top of the head is the most sacred part of the body, which is why you should never touch a stranger's head because it is considered to be rude. Try to avoid pointing your feet directly at another person, and never put your feet up on a table because the bottom of the feet are seen as unclean.

When giving someone directions, avoid pointing with your index finger because it is considered to be rude. Instead, people often point by using their whole hand or nod their head in the intended direction. During interactions, Singaporeans tend to nod frequently as a way to show that they’re engaged in the conversation, however, their overall body language is often quite modest, with gestures being infrequent and restrained.

As a multicultural haven, Singapore is home to a beautiful mix of people from all over the globe. As such, it’s important to get to know your colleagues and their ethnic backgrounds for reasons of politeness. For example, if your manager is Muslim – as many Malay people are – you may wish to consider avoiding scheduling a business meeting on a Friday or during Ramadan, when they could be fasting.

When greeting someone, it’s common practice to firmly shaking hands, with a small polite bow to accompany the handshake – some older people of Chinese ancestry may prefer to bow. Punctuality and efficiency are virtues in Singaporean business culture – so avoid being late! If there’s a good chance that you’re not going to make it on time, you should call beforehand to inform them. Similarly, efficiency in terms of the presentation of materials, reports and completing tasks is valued.

Adding to this, “efficiency, as a whole, is a highly valued quality in Singapore. From government agencies to the workplace or friends making social arrangements Singaporeans are always looking for the most efficient solution” says LiLing.

She continues to explain that “Singaporeans like systems and love a system of rules to follow. If you will be working in Singapore with local colleagues, you’ll see efficiency and the ability to follow a formula or set of rules being the default mode of most Singaporeans. If you’re waiting for your driver’s license, you’ll love the system. If you are a creative soul, it might be a little stifling and frustrating”.

Singapore’s healthcare system in particular is highly efficient, which is why Singapore is well-known as being one of the top destinations for medical tourism. Medical tourism is a prominent part of Singaporean lifestyle and adds to the multicultural nature of the city. Other than offering world-class healthcare to those with an appropriate international healthcare policy in place, the cost of procedures are far less than you’d expect. In fact, medical tourists in Singapore can expect to save between 25% and 40% of the cost that they would usually pay for a procedure in the US.

Researching and getting to know the culture beforehand is a great star, but nothing can replace actually experiencing the culture first-hand. You may make the odd mistake from time to time, but that’s to be expected as a newcomer. Luckily, Singaporeans are some of the most welcoming and friendly people you’ll ever have the pleasure of meeting, so don’t be too hard on yourself if you experience a cultural blip every now and then. Let each experience shape you and stay open-minded – before you know it, you’ll be living like a local in no time.