Singapore's Iconic Structures and Why You Shouldn't Miss Them 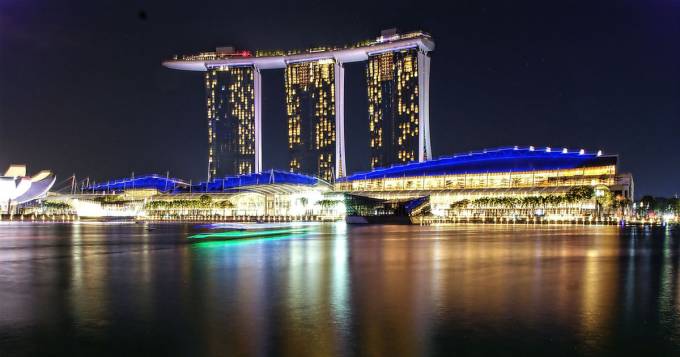 The metropolis of Singapore is a fascinating blend of the old and new. From colonial buildings to ultra-modern skyscrapers, the city exudes both style and culture. "The juxtaposition of futuristic, high-rise green buildings with post-independence [after 1965] modern complexes and older colonial buildings and shophouses gives Singapore's urban landscape a unique identity and experience," says Chong Keng Hua, associate professor of architecture and sustainable design at the Singapore University of Technology and Design. Ready to explore Singapore’s architecture? Here are some of the city’s most notable landmarks.

Opened in 2011, the 2,500-rooms Marina Bay Sands is probably the city’s most memorable structure. The building features three towers linked by a lobby. As well as a hotel, the 55-story structure boasts the Shoppes at Marina Bay Sands mall and the ArtScience Museum. One of Marina Bay Sand’s most popular attractions, however, is its rooftop infinity pool. Curious? The Marina Bay Sands was featured in Independence Day: Resurgence, a sci-fi movie, which was also filmed in other parts of the city.

Housed in the former Supreme Court and City Hall building, the National Gallery Singapore features the city’s largest collection of art. Constructed in the 1920s and 30s, the monument still boats the city hall chamber, as well as the rotunda, lobby, foyer and balcony of the Supreme Court. The historical significance of the building is complemented by more than 9,000 works of art from Southeast Asia from the 19th century to the present.

From humble beginnings as a 10-room guesthouse in the 1880s, the Raffles Hotel has morphed into one of the best examples of Singapore’s colonial architecture. The hotel has undergone numerous makeovers since its main three-story building first opened in 1899. Named after Sir Stamford Raffles, the Lieutenant-Governor of the Dutch East Indies and founder of Singapore, the neo-Renaissance hotel comes complete with high ceilings and elegant verandas. It is said that author Somerset Maugham loved to grab a drink or two at the hotel’s bar, which is also where the Singapore Sling was invented.

With more than 1000 apartments and around 43 elevators across 31 buildings, The Interlace is Singapore’s most striking residential complex. Designed by OMA and Ole Scheeren, the complex resembles a stack of bricks positioned on top of each other Jenga style. The Interlace, which took around six years to complete, is equipped with supporting facilities such as swimming pools, gyms, playgrounds, rooftop gardens, tennis and basketball courts and even karaoke rooms. The structure won the accolade of The World Building of the Year at the 2015 World Architecture Festival.

The Chijmes complex houses various buildings from different times in history, the oldest of which served as a Catholic convent school in the 1800s. In fact, the building’s name references the Convent of the Holy Infant Jesus Middle Education School. Today, the complex features restaurants, bars and shops. Visitors should not miss the Gothic chapel, which features a five-story spire and over 600 columns with carvings of birds and plants.

Pretty normal..usually more obvious towards the end of the second trimester or third trimester.

Re: Benefits outweigh the risks of mRNA vaccine?

Let's face it, short-term, there will always be outliers, side-effects, regardless of what vaccine you use, or indeed any medical treatment you apply in general, tried and true included. Clearly though, as of the here and now, statistically, the benefits of mRNA outweigh the risks.

Is it still necessary for me to keep ICA updated in my pending PR application since I will be receiving a renewed EP from the same employer? e.g. email ICA/etc.) In addition, my base salary will be modestly increased. Is it .....