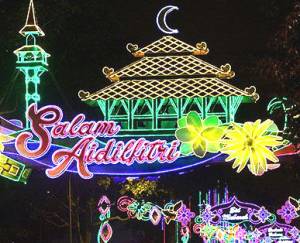 With Hari Raya meaning ‘Day of Celebration’, it’s easy to see why non-Malay speakers are often confused between Hari Raya Puasa and Hari Raya Haji. These two widely-celebrated Muslim holidays in Singapore take place approximately 2 months apart and are celebrated in very different ways. Between the two festivals, the more visually spectacular one is Hari Raya Puasa (also known as Hari Raya Aidilfitri), which occurs at the end of the Islamic holy month of Ramadan.

The Ramadan commemorates the first revelation of the Quran to the Prophet Muhammad, and practitioners spend the month praying, fasting and abstaining from excesses, in order to strengthen their faith, ridding themselves of earthly preoccupations and turning their thoughts towards God. The fasting takes place between dawn and dusk, and practitioners are not allowed to take any form of food or drink during this period.

The Ramadan period will also see a whole host of street fairs and bazaars being conducted as the Muslim population gears up for the Puasa celebrations. As fasting takes place from sunup to sundown, these fairs are especially lively after 7pm. One of the most popular Hari Raya markets is the Geylang Serai market which has been organised annually since the 1970s.The market is a fantastic location to snack on elusive street snacks such as Ramly burgers, coconut ice cream and traditional kuehs and cookies, while admiring the exquisite woven carpets and glittering Baku Kurungs and Baju Melayus on display.

Hari Raya Puasa begins on the first day of the month of Shawwal, and begins with a prayer session in a mosque. Not unlike the Chinese New Year, the Hari Raya Puasa is also a time of great festivity and family bonding, where big and small alike put on new clothing in similar themes or colours, and celebrate the festival by visiting their friends and family. With their vivid colours and thin silken fabrics, traditional Baju Kurung are still very popular today for their comfort, practicality and elegance.

However, no festival is complete without a veritable buffet of delicious food. Perennial favourites such as Ketupat (diamond-shaped plain rice dumplings wrapped in coconut palm leaves) accompanying platters of spicy and savoury Beef Rendang will be simmering on the stove in most households, and as the catching up carries on late into the night, tasty snacks and sweet kuehs are always within reach for that extra sugar rush.

Hari Raya Haji, on the other hand, is a more sombre affair as the holy day commemorates the successful passing of a trial undertaken by the Prophet Abraham. Commanded by God to sacrifice his son to show his devotion, Abraham had placed his son under the knife. However, the son was substituted with a ram at the last moment as God was pleased with the strong submission of Abraham.

Today, the day continues to be celebrated with much fervour as Muslims come together as a community to remember their faith and perform traditional ceremonies on this holiest of days. Dressed in their best clothing, young and old will go to an open space or to a mosque, where prayers are offered and animals are sacrificed in a ceremony called the Korban. The meat from these animals will be separated into three portions. The family who sacrificed the animal would receive a third, their friends and relatives would receive a third, and the poor or needy would receive the last. Charity is strongly emphasised on this day where people donate food or money and give assistance to the poor. Family members may also give gifts to young children as a mark of their love.

In urban Singapore, it may be difficult for residents to own livestock which they may use for the Korban festival and thus, the intended sacrifices are commonly shipped in before the day itself. Due to rising costs, however, some Muslim Singaporeans are now performing this ritual overseas. Others have also donated Korban meat to the less fortunate in other countries as part of their humanitarian efforts.

Re: Can I bring hamsters?

The SG relocation companies are able to log into the quarantine facility website at any time to see how full the quarantine spaces are. You will not be able to do that by yourself until you are halfway through the process.

Right now, official quarantine spaces are fully booked up to 6 months in .....

Re: 4 men charged over Covid19 breaches in New Years eve

Probably all that face recognition software was able to get a good lock on.

Personally, looking at your profile, if you were rejected with both of you and your spouse's qualifications, I do not think a baby girl will make any difference. I also feel that, at least one year, if in a hurry and don't mind blowing the application fee, would be wasting possibly another year and .....