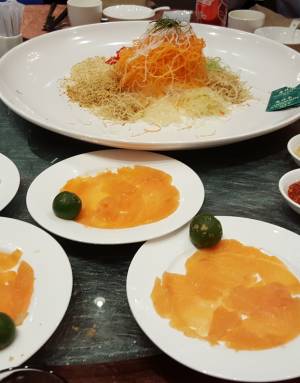 During the Lunar New Year, there are many different types of delicious foods served. Some are available all year round, but others, such as yusheng, are dishes that you’d not be able to find once the holiday period comes to an end. If you’re in Singapore around the Lunar New Year, take the opportunity to try some yusheng with your friends and family as the experience is like none other.

Even for those extremely familiar with Chinese culture, a tossing up of yusheng at dinner could be a totally different kettle of fish as the practice only exists in Singapore and Malaysia. In fact, this dish was first created by four chefs in Singapore and served during the Lunar New Year in 1964! The dish is especially popular in the Lunar New Year as its name, ingredients and practice are all imbued with cultural significance, and the partaking in this dish is thought to usher in auspicious good fortune for the rest of the year.

Yusheng is part meal, part performance and part activity. For those who aren’t keen to experiment by themselves, one tip would be to go to a good Chinese restaurant to try this dish, as most Chinese restaurant’s servers would be familiar with the procedure and willing to lend a hand. Remember also that this is an additional service, and that it’s considered polite to tip the server with a red packet once the dish is complete and ready for the ingredients to be mixed.

To begin, all the ingredients are laid out in preparation, with a single large dish in the centre that contains a bed of finely sliced vegetables such as radish or carrot. Before adding the other ingredients, the server says a few words as well as some New Year greetings to wish all the participants a good year ahead.

Next, ingredients are added one by one in a prescribed order, each with an accompanying Chinese saying or phrase:

At this conclusion, diners should then proceed to stand and use their chopsticks to mix the ingredients together while enthusiastically throwing the ingredients up in the air. Many believe that the height of the toss would correspond to their fortunes, and as such, don’t be too surprised at the aftermath when vegetables and sauce bestrew the floor!

Hello, I'm trying to calculate my PR chances in May after my first tax filing.

Re: SC approval likelihood and some general advices

In addition to the above, one thing did occur to me. The timing and durations of your future wife's return to the PRC will have to be monitored carefully so as not to lose her PR. While it shouldn't make any difference, it has .....

Re: is haze season back again?

Burned smell was back tonight with the winds. But seems it is only in the east area, which can give some hint where it's coming from